| WHY TRAVEL TO MEXICO

In Mexico you get experiences for life, whether you prefer the cultural or the nature. In the past, the Aztecs ruled the area around Mexico City, while the Mayans lived in the south of the border with Guatemala. The successors of the Native American cultures, the Spanish colonial masters, have left behind charming colonial architecture. And then of course there is nature with its deep gorges, soaring mountains, lush rainforests, volcanoes, cactus-covered deserts and paradise sandy beaches. 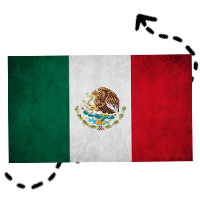